Christchurch-born Dunedin-based composer and musician Dudley Benson recently extended an open invitation: to join him on the afternoon Waitangi Day (February 6), at the Christchurch Art Gallery Te Puna O Waiwhetu, for an hour-long site-specific free performance event in which he marries the land.

Benson is an idiosyncratic artist who creates singular, distinct and often sweetly poppy experimental work that combines choral work, close harmony, and unusual instrumental arrangements with styles and motifs more closely associated with hip hop and electronica. He sings in both English and Te Reo Māori, and his work has consistently engaged with the flora, fauna and environment of Aotearoa New Zealand. This performance incorporates music from previous and upcoming albums, and my take on this, musically, is a cross-genre Bon Iver via a goth New Zealand Lady Gaga. I’m not a music writer though; I am more interested here in the theatricality of this event, and its implications and resonances as a piece of ritualistic, stylised, site-specific performance art.

The structure of the event is both sound and familiar: Benson, as the veiled bride, is assisted by his sister Jess, who acts as the bridesmaid. They begin on a suspended walkway up above the gallery’s large foyer for a sort of invocation; flower petals are thrown; he makes his way down the large marble staircase (complete with a quick dramatic moment with a wind machine); vows are made; the bridal wear comes off; the marriage is consummated. The latter part of the event is the equivalent of the reception: Benson sings a cheesy local love song, there’s confetti and photos and some downbeat tunes, and for those who make it to the end there’s a lovely cake.

I quite like ambitious work that can best be described as a little bonkers. I am also really thankful to see something completely out of step with the usual artistic goings on in Christchurch, and I love that the gallery are hosting events such as this. However, this performance as an overall entity is incoherent in a manner that I find really difficult to parse (hence this piece of writing – me trying to figure things out through typing rather than scrunching my face up). By this, I mean it is overly signified in a way that really rejects a coherent reading, although I don’t get the sense that this was necessarily the intent.

There are the swift shifts in tone. We move between sections of stylised, ritualistic action that are almost kitschy and camp in their gravity, to a looser playfulness that has a definite twinkle in its eye, to a deeply serious presentation that sometimes strays into earnest indulgence. Some of these song-events are set pieces, after which Benson takes a bow, which accentuates our role as receptive audience. As my friend Douglas points out, this plays with the sort of liturgical performativity and theatricality you’d find within the high Anglican tradition, which marries (hah) clearly with Benson’s background as a boy chorister. (Full disclosure: my younger brother started with the Christ Church Cathedral choristers the same year that Benson did, so that this register of performance, both musical and religious, feels overly familiar to me.)

There’s the use of black, which has its own sense of wide-spread national signification. This is most evident through the jet-black clothing pieces (credited to Dunedin-based designer Nom D). Jess Benson wears an amazing, bulbous frock. Dudley has a utilitarian kilt + gauntlets + black singlet (with New Zealand crest) ensemble. Both wear high, heavy black boots (knee-high Doc Martens?). There’s the disjuncture, then, between bridal-white, present only in the veil that Benson briefly wears, and the use of black for mourning and as a tarnish. Death appears later, too; the percussive song of consummation plays with the call of the fantail / tīwaiwaka / pīwakawaka, who ruins trickster demi-god Maui’s attempt to kill the immense goddess of death, Hine-nui-te-po. When Maui climbs inside her birth canal and up towards her heart, Hine is woken by the laugh of the mocking fantail, and she crushes Maui between her thighs, chomping him with the obsidian teeth that line her vagina. Benson calls explicit attention to this mythological connection, so I’m not sure what this says about the future of the marriage.

There’s also the performers’ coal black face makeup, which is augmented by something silver and sparkly around the forehead. It has me wincing – wincing so, so profoundly –  both at the beginning of the piece, and later, when it is gently wiped from Benson’s face in a manner that feels like a cleansing and an anointing. Given the detailed attention to aesthetic, design and costume, I have no idea what to make of this.

ETA: lovely Donna took this great picture of pre-show prep and has been kind enough to let me use it here:

There’s an interesting ambiguity to do with sex and gender. Benson takes on the role of (demanding) bride, wearing clothing that plays with the iconography of fetish culture, when ‘marrying’ the land, which is itself usually feminised as both mother and lover.

There’s the troubled interplay between an engagement with colonialism and colonisation that intersects with a sense of childhood (and child-like?) nostalgia. Benson’s other work  certainly engages with issues of national identity, individualism, the environment and cultural heritage. That said, I am also not sure how to situate his work vis-à-vis the sort of Pākehā nationalism that venerates native flora and fauna, and the beaches and the outdoors, but that eschews more difficult questions about the widespread impacts of colonisation.

Perhaps most significantly, there’s the date of the wedding: Waitangi Day, which is so loaded with hope and potential, with historic and present day trauma, with celebration and anger and reflection, and with decades of struggle and suppression. I’m watching this as a first generation New Zealand-born Pākehā woman – Ngāti Tiriti – and I can’t tease out any sort of clear political point of view, at an individual level or otherwise. 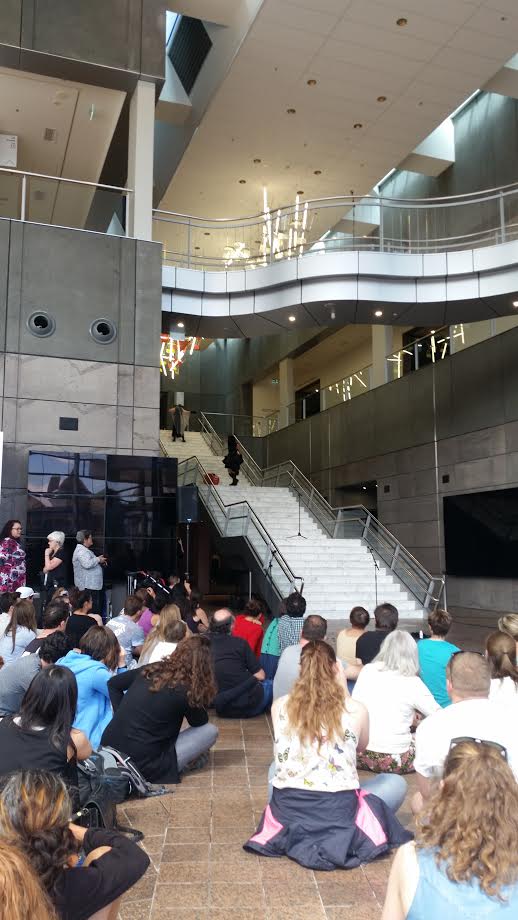 All of this combines to create… I’m not sure what. The teacher in me wants to ask: what’s the thesis statement? If the purpose really is just surface level – Benson marries the land, and there are some stylish costumes and props – then it’s loaded with so much provocation that I don’t really know where to begin.

This combination of interest, perplexity and misgivings aside, the biggest source of disquiet for me is that a wedding is a reciprocal ritual, in which two make pledges to one another. In this work, Benson marries the land – but does the land marry Benson? The land certainly doesn’t have a physical proxy, or a voice in any of this, and this rewrites acts such as vows and consummation in a very confronting manner, especially given the date of performance. (Ironically-not ironically, one of the songs Benson sings is about losing his own voice and calling it to return, hoki mai, all while being present with the land yet isolated from others. Is the land, then, a means of facilitating individualistic self-knowledge and identity? Of tangibly anchoring a Pākehā identity in post-colonial New Zealand? RABBIT HOLE ALERT, etc.)

So: we are on the tiled floor of an art gallery, and backed by a tall, undulating wall of slightly tinted panes of glass that recalls the nearby Avon River / Ōtākaro, as well as the artesian spring that the gallery is built upon. Benson’s sweetly circular songs invoke birdsong, and refer to his affection for and affinity with the South Island, Banks Peninsula, Akaroa – outdoor spaces that were seen by colonists as empty land and by the tangata whenua as entities and ancestors with their own sense of personhood and familial connection. The copy for the event states that it “is a bold and visceral declaration of our relationship with the land, expressed through engaging pop music”. But, who is the ‘our’ mentioned here? Is this presence or absence of ‘the land’, then, a question that’s implicit in the work?

All other modes of interest and engagement aside, the fact that there doesn’t seem to be a strong point of view here really bothers me. This is especially so given the earnestness of some of the ritualistic elements, such as members of the audience-congregation pouring cups of coloured sand over Benson and ‘letting something go’ as he sings the final song. I’m left wondering how much workshopping this piece had, whether anyone else cast an eye over the performance as a piece of narrative, or whether there was any particular intent behind the work. There is so much contradictory, inconsisent information here that, as a friend puts it, I’d have liked for the wedding to have had a bar.

PS sorry about my crappy photos. That’s what you get at a wedding.

View all posts by erinharringtonnz