The relationship between the frail puppet and its manipulative, ambivalent masters is a resonant and recurring way of conceptualising the dynamic between performer and director, dancer and choreographer, work and creator, and artist and audience. It’s one that sits close to the core of Alice Canton’s show for the upcoming Auckland Fringe, Little Sister.

Alice explores, engages with, and re-works Stravinsky’s ballet Petrouchka, first presented in 1911 by the Ballets Russes, which tells the tragic story of a puppet love triangle that ends pretty poorly for its protagonist. Subjective encounters are important here, and Alice draws from the raw material of her own relationship with the ballet’s themes and narratives, in particular a 1993 production staged by the Royal New Zealand Ballet, which involved her then 10-year-old sister. Alice presented her first week’s work yesterday, followed by a feedback session, at The Gym at the Arts Centre – a lovely, flexible mixed use performance space that is currently overseen and used by Free Theatre.

I love these sorts of development-driven feedback sessions, not really because it’s an opportunity to see behind the curtain, but because there is such rawness, richness and interesting intentionality about the process of creation and in the  space between initial concept and presentable work. Importantly, Little Sister itself is designed as a work-in-process, rather than an outcome-orientated endeavour (I did some stuff, here is the static end point, done with that, move on). Each night audiences will be able to see something a bit different based on that day’s work, but each performance also exists for itself, rather than being just a stepping stone towards a final or ‘ideal’ performance. 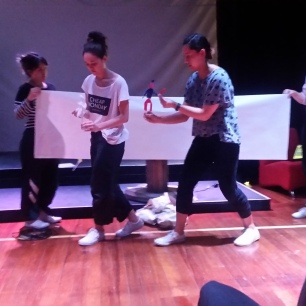 Here, Alice and her ‘helpers’ experiment with the way very simple objects come to life and then return, sometimes shockingly, to their prior inanimate states, being both endowed with and robbed of life by those who manipulate them. Camera footage, via cellphones, is projected on the wall, allowing for a facinating playfulness with scale and the relationship between 3-dimensional objects and their 2D representations.  I’ve been thinking a lot about the nature of subjectivity because of a project I’ve been working on, so I’m quite taken with the way that inanimate objects – puppets made out of basic household objects, fabric, and rubbish; lighting cables; children’s toys – exhibit agency and personhood, especially in ways that are unsettling, unexpected or uncanny. (This is exacerbated, quite accidentally, by the way that the smartphone’s camera’s facial recognition squares highlight some, but not all, performers and puppets; why is a gingerbreadman toy endowed with personhood, but not a plastic Pikachu?)

The figures of the automaton, or the puppet, or the monster – everything from Adam, to Frankenstein’s monster, to the clockwork automatons of the late 19th century and modern day cyborgs – have historically been shaped not just by the nature of its creation and creator, but also its capacity to experience life, to feel and to rebel. Even with some prior knowledge about the outcome of the ballet, there is still a sense of uncertainty and danger: there is frisson in the space between the puppets’ creation, their animation, and their eventual, perhaps inevitable demise.  How are identities and meanings articulated (in the literal, putting-together sense)? How does a puppet feel, and communicate its feelings? What is a puppet’s language, and if can it exist without its master, what are the implications for it (and us)? 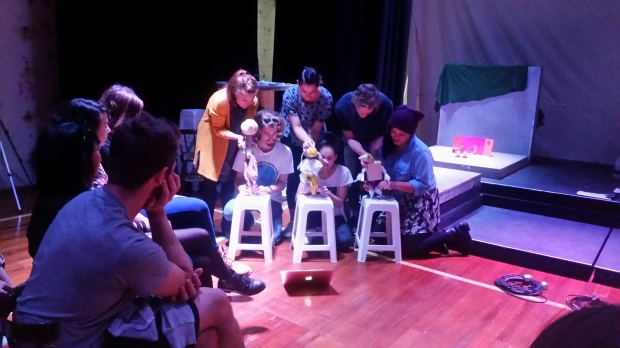 Alice’s show-and-tell is the first of what look to be weekly development / work-in-process / -progress sessions hosted on Friday afternoons by Two Productions (Tom Eason and Holly Chappell-Eason). The company has had just taken up residency within the newly restored and refurbished Arts Centre, and they do some terrifically interesting work; the devised youth production The Wild Hunt, which was staged with the Body Festival in 2014, was one of my favourite things full stop that year, and their other productions exhibit a great sense of playfulness and curiosity. Christchurch’s theatre ecosystem has a long had some serious gaps in terms of low risk, high return creative spaces (sandboxes, both physical and conceptual), especially for younger and emerging practitioners, and Two Productions’ broader goal to help facilitate the development of arts practitioners and new work is exciting and admirable. There’s a bit more about their long-term goals here.

View all posts by erinharringtonnz